For example, I have a coffee cup in front of me. I think about that creator. Where is the point that the creator devised, where is the difficult place? From which angle would the creator want the coffee cup to be seen? Perhaps his family might have pride about the coffee cup and boasted to the neighborhood. I imagine such a thing. Then, the feeling and soul of the creator may be felt in the coffee cup. Not limited to coffee cups, there are creators for everything, such as cars, architecture, clothes, and dishes. I shoot the invisible feelings with the camera. At that time I shoot with respect.

When I see an attractive thing while I’m walking through the city, I take a shutter. The attractive things for me are the peaceful appearance of people, vitality and smiles. I want to take a picture of a positive sight which actually existed even for that moment and leave it forever. 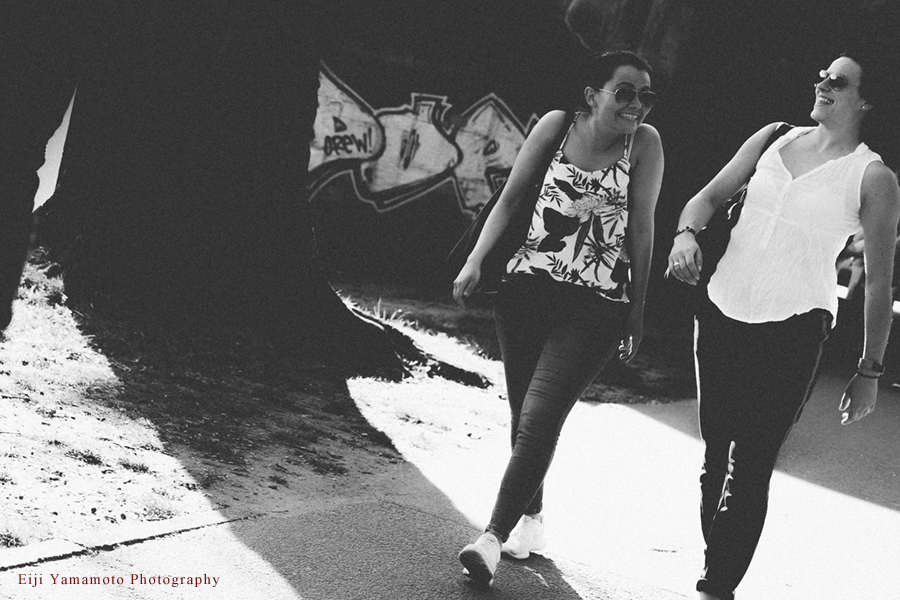 As I am walking through the streets, women come walking from the other side. They have a very good smile. Especially the ladies on the left. Take pictures with awareness of the walking speed of each other and the passing distance. And after that shoot it disappears as though the scene did not exist. I want to take such a moment with a camera and leave it.

Impulsive. There is something that I take impulsively. It is not that I have not thought of anything, it is an urge that overflows from my deepest psyche, so my straight psychology may be appearing.

Today, I saw a beautiful one. I want to tell it by photograph. For example, a good atmosphere couple, a father pushing a stroller, a cute old woman with a smile. In other words, seeing things, I am touched by being beautiful, my mind is moving. And conscious of composition and light. That is, photographs are taken with the mind and eyes.

When taking a portrait, the mind of the photographer is reflected on the subject. In other words, the portrait photographs another person, but it can be said that it is actually photographing the photographer’s mind.

I want to photograph the mind and relationship, not the body of the model.

I like street photography and portrait. I want to photograph people’s kindness and affection.

Currently, street is my main photography field.  So “street” page is my currentl main page.